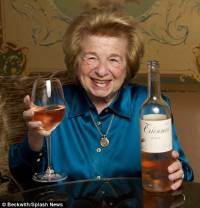 Sylvie Tremblay's Aunt Sally tends to give the initial impression of being a sweet, if slightly dotty, little old lady, but she has a checkered past, and for that matter a not entirely pristine present. In the 60s and 70s, she was a decidedly free spirit, and groupie to a lot of famous musicians. She eventually settled down in Toronto, then took early retirement at 55 (close to 20 years ago - she's in her early 70s now) and moved back to Grant's Falls, where she had grown up.

She was fond of all sorts of recreational intoxicants back in the day, but these days doesn't usually partake of anything stronger than alcohol - though it's hard to say how much of that is simple lack of opportunity. However, she very much enjoys her drink, and isn't always exactly moderate in her consumption of it. And when tipsy, she's not always very conscientious as to what is and isn't appropriate conversation.

When Sylvie's husband left her and the kids, Sally invited them to come up and stay with her for a while, since she had a big house and could use the company… But Sylvie also discovered fairly soon that Aunt Sally might need more than just company - someone to keep her from drinking herself into a stupor on a regular basis (and/or clean her up and drag her off to bed when she does), and stop her before she regales the local church ladies with the story of that time she she served as the altar in a Black Mass with the members of three different metal bands.

No one, including Sylvie, is entirely sure where Sally got the money to retire comfortably at 55 and buy a big house, even in an inexpensive town like Grant's Falls, given that even after she gave up her party-girl ways she tended to drift through a creative assortment of jobs, most of which didn't pay all that well. And Sally herself us always decidedly coy and evasive when asked. But it's probably a safe bet she didn't come by it by any respectable means.

The townsfolk's view of Sally varies, from those who consider her a disgrace and cross the street if they see her coming, to bemused tolerance, to those who regard her as the best source of entertainment in town.

Except where otherwise noted, content on this wiki is licensed under the following license: CC Attribution-Share Alike 4.0 International